The hoof is the horse's foundation. Although it appears to be one solid body part, the hoof includes both exterior and interior structures that work together as the horse moves.

The exterior hoof structures support and protect the interior structures. Download this PDF by clicking on the image, to see an exterior anatomy diagram and each structure's placement in the hoof. For any problems with Adobe, refer to this guide for troubleshooting. 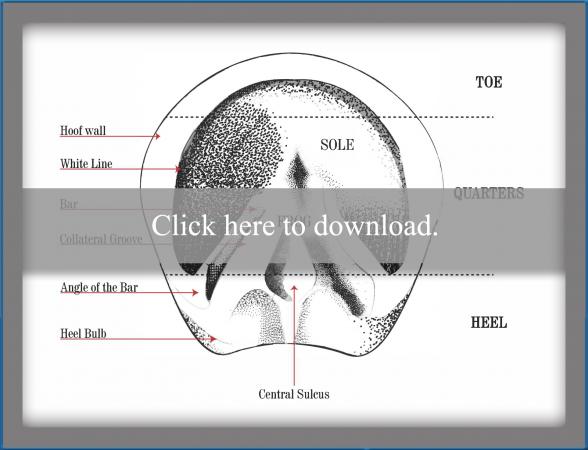 The hoof wall is a weight-bearing structure that grows from the coronet band. It is made of keratin, similar to a human's fingernail, and has a low moisture content, making it hard. This protects the interior structures of the horse's hoof. The wall grows continuously, so the horse needs regular trims from a farrier to keep the hoof-shaped correctly.

The sole runs from the bars to the frog on the underside of the hoof. Low moisture content makes it feel hornlike. The sole is concave, and its purpose is to protect the interior structures and support the wall.

The frog is a rubbery V-shaped structure that distributes impact to the plantar cushion as the horse moves. It also provides traction on uneven surfaces.

Collateral grooves are on either side of the frog. Their depth is proportionate to the sole's thickness. These fill with dirt as the horse moves, providing traction.

The white line is where the sole meets the wall on the bottom of the hoof where it forms a shallow groove. It seals the coffin bone within the hoof and protects it from infection.

The bars are weight-bearing structures that prevent the heel from distorting and keep the wall in a semicircle shape. They begin at the heel and angle inward, surrounding the frog.

Heel bulbs are similar to a human's hand at the base of the thumb. They are soft tissue and enclose the digital cushion which provides shock absorption and enhances circulation.

The coronet band, also called the coronary band, is at the top of the hoof at the junction of the wall and the leg's hairline. New hoof growth generates here.

Many of the interior structures absorb concussion, preventing injury as the horse moves. Download this interior anatomy diagram to see the inside of the hoof. 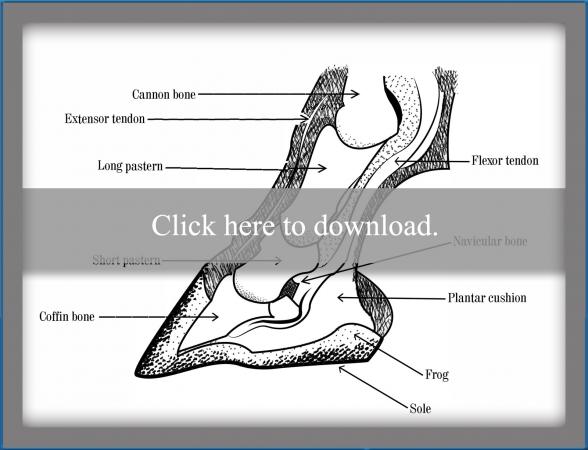 The long pastern is the top piece of the pastern joint. This bone absorbs concussion as the horse moves.

The short pastern is the lower piece of the pastern joint and the top piece of the coffin joint. This bone has rounded ends so that the hoof can rotate side to side on uneven ground.

The navicular bone is under the coffin bone and the short pastern. The deep flexor tendon runs underneath it before attaching to the coffin bone, so it works like a fulcrum on the tendon as the horse moves. This prevents the coffin joint from over-articulating.

The extensor tendon straightens the coffin and pastern joints, keeping the horse from "knuckling over." This tendon runs along the front of the hoof.

The flexor tendon allows the horse to bend his coffin and pastern joints. This tendon runs along the back of the hoof.

The plantar cushion, also called the digital cushion, is above the frog. Its springy material expands and contracts to dissipate shock as the horse moves.

No Hoof, No Horse

Proper hoof care and prompt attention to hoof problems are important aspects of keeping the horse sound. The hoof is a complex structure with each part working in unison, so when one part is compromised, the horse cannot perform his best and may suffer permanent lameness.