Mastitis is a serious condition that is easily treatable with early intervention. Mastitis is a condition that affects lactating mares, either while they are actively nursing, or most commonly, during the 'drying out' period when the foal is weaned.

Mastitis is udder inflammation and infection caused by bacteria or fungus, most commonly staphylococci and streptococci bacteria. Mastitis occurs when bacteria enters the udder. This most commonly occurs when the mare lies down on dirty bedding and bacteria gain access via the teat. In addition, trauma to the udder by the foal or wounds can provide an entry point. In some cases, the mastitis occurs spontaneously, for no apparent cause.

Some mares are more susceptible to mastitis because they have high estrogen levels, which enlarges their mammary glands. Overweight mares and those with tumors on their pituitary glands are also more susceptible.

Mares have two udders, but usually they develop mastitis on only one side. In rare cases, they may experience the condition on both sides. If nursing, theoretically the foal can still feed from the unaffected side. However, mastitis is a painful condition and she may not allow the foal access the sore mammary area. Take this into account and check that the foal is getting enough nutrition. This may involve hand-rearing the foal until the mastitis has resolved.

The earliest signs will be restlessness due to discomfort. The mare may go off her feed and is likely to be resentful of having the udder handled. This could mean her kicking out at a nursing foal, so keep in mind a very early clue can be a hungry foal.

In addition, symptoms include fever and lethargy, but these are present in many medical conditions and do not indicate mastitis by themselves. Painful, swollen udders are the most common symptoms, and this is serious with or without fever. Also, the udder may be hot to the touch, and the mare may resent you touching it. Mares may also exhibit edema on their abdomens in front of the udders and decreased appetite. They may walk stiffly or stand with hind legs apart. When milked, mares with mastitis produce a clear fluid with white or grayish lumps.

Without prompt treatment, mares may develop abscesses on the udders or the mammary tissue may die. In extreme cases, mastitis can lead to death.

Odds are that mares only experience mastitis once in their lifetimes. Only a small number develop mastitis a second time.

Mastitis is a serious medical condition, and mares need early veterinary intervention to make a full recovery. In the early stages, you can apply a warm poultice to the affected udder to help draw out the infection, if the mare will tolerate it. However, the area is likely to be sore and painful, and the mare may lash out and not cooperate.

Call the veterinarian immediately if the mare's udders are enlarged, swollen, leaking pus or developing lesions, or if she has a fever over 101.5 degrees Fahrenheit without other symptoms. If you are suspicious of mastitis, apply a heat pack and then hand strip the udder. Repeat this several times a day to try and milk out the infection. If the udder is painful to the touch, then veterinary attention is essential.

Expect a vet to palpitate the mare's udders and strip milk to relieve pressure. Some may perform an ultrasound. Because mares' anatomies make udders difficult to reach, this process is easier if mares have previously had their udders handled. 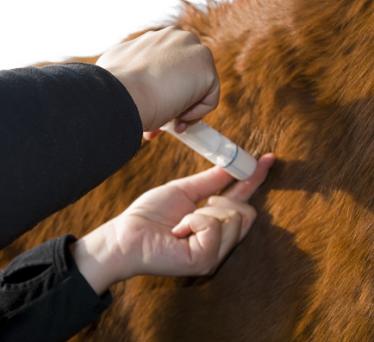 Mastitis is a very treatable condition, and most mares make a full recovery without lingering effects. Culturing the udder fluid helps them determine the most effective treatment. The vet may give systemic antibiotics or instill mastitis tubes, designed for use in cattle, into the affected teat.

Keeping a mare's udders clean is the best prevention. Dirt, sweat and body oils accumulate between teats, so use warm water or sheath cleaning solution to gently wash the mare's udders, beginning at weanling age.

With early veterinary intervention, mares often recover from mastitis within a week of beginning treatment. If your mare is lactating, watch carefully to prevent this painful infection. If your mare does happen to get it even if you're watching everything carefully, at least you'll be able to get her early intervention to hopefully contain the infection.

3
Comments
© 2006-2020 LoveToKnow, Corp., except where otherwise noted. All Rights Reserved.
Mastitis in Mares