Horse racing is the "Sport of Kings." This thrilling athletic event occurs across the world between Thoroughbreds, Quarter Horses, Standardbreds and Arabians.

The three styles of horse racing are flat, jump and harness. 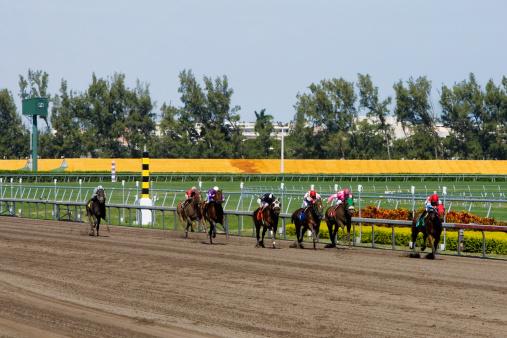 The race begins with horses loaded into the starting gate. The crew loads horses quickly because the starting gate is the most dangerous place for horses and jockeys. A bell sounds, the gates open, and the horses run down the track. The first horse and jockey team to cross the finish line is the winner. In some cases, two or more horses finish the race so close to each other, the race officials must use a photo finish to determine the results.

Flat racing measures distances in furlongs, or 1/8 mile increments. A sprint is seven furlongs or fewer. A route is one mile (eight furlongs) or longer, and a marathon is longer than 1.25 miles. 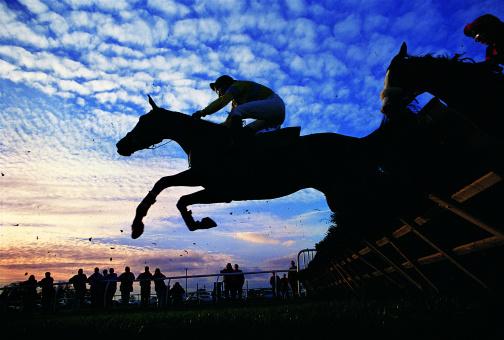 Jump racing, or steeplechasing, is more popular in the United Kingdom than in the United States. Horses run a specified distance but must jump several obstacles before they reach the finish line. This makes steeplechasing more dangerous than flat racing. Steeplechases may begin with a starting gate or with a flag.

In harness racing, horses pull lightweight two-wheeled carts called sulkies, and drivers ride in the carts. In the United States, only Standardbreds compete in this event, but other breeds compete in Europe. The horses begin behind a moving starting gate pulled by a truck. Most races are one mile.

The horses move at a pace or a trot, never breaking gait. Standardbreds are "pacers," meaning they move two legs on the same side of their bodies simultaneously - such as the right front and the right hind. "Trotters" move diagonal legs simultaneously.

Horse racing has a hierarchy of race quality. Although most horses start in Maiden races, low-end horses spend their careers in Claiming classes, while elite competitors appear in high-dollar Stakes races.

Maiden races are for horses who have not won a race yet. These vary in distance, and horses of the same age and sex compete against each other. When a horse wins its first race, it "breaks its maiden."

Claiming races are for horses for sale to a licensed trainer or owner for a predetermined price at the end of the race. The person claiming the horse pays in advance and takes ownership whether the horse wins, loses or dies in competition. Most races in the United States are in this category. The previous owner gets the purse if the horse wins. These horses are typically lower-quality, less competitive racehorses than those who run in Allowance or Stakes races.

Allowance races are for horses who broke their maidens but are not ready for Stakes competition. Horses in this category have broken their maiden and have won Claiming races.

Stakes races are for elite racehorses and offer the highest purses. Owners must pay nomination fees and entry fees for their horses to run. Most nomination deadlines are 10 days before the race but may be up to a year in advance.

Non-Graded Stakes is the lowest classification in this category. These offer modest purses, and some trainers use this as a step between Allowance and Graded Stakes competitions.

Graded Stakes are Grade I, Grade II or Grade III, with Grade I being the most elite. The Triple Crown and the Breeder's Cup are all Grade I. These races award the highest purses, attracting top racehorses.

Thoroughbred racing is the most well-known type of racing. This breed has speed and stamina, making them ideal racehorses. The Jockey Club registers Thoroughbreds in the United States.

Thoroughbreds train for the racetrack in the fall of their yearling year. They start by learning to accept a saddle and bridle, and later the weight of a rider. They get used to the starting gate and jog before they gallop. Horses ready to compete run in Maiden races in their two or three-year-old year.

Quarter horse racing measures distance in yards rather than furlongs. Races are between 220 yards and 770 yards, making them much shorter than Thoroughbred horse races. The timer starts when the starting gate opens while Thoroughbreds and Arabians start the clock a few strides down the track. A 2006 study published in the Equine Veterinary Journal showed that Quarter Horses run faster than Thoroughbreds or Arabians.

The American Quarter Horse Association (AQHA) measures a racehorse's speed index to compare horses' abilities in each race. AQHA calculates this by averaging the three fastest times for the last three years for each distance at the track. This is the baseline, or Speed Index 100. Then, to determine each individual horse's speed index, officials compare the horse's finishing time with the speed index for that event, and then add or subtract points based on the individual's time. Those with a speed index over 80 earn the Register of Merit award. 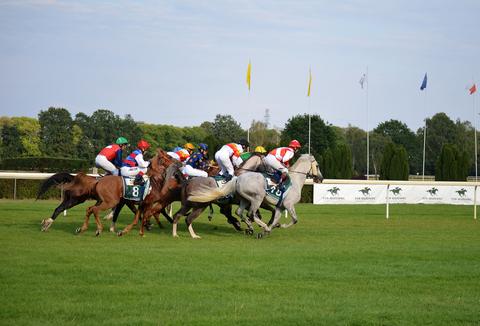 Arabian horse racing is similar to Thoroughbred horse racing and occurs on the same tracks. Races are 4.5 to 14 furlongs, and most are six furlongs. Purebred Arabians only race against other purebred Arabians registered by the Arabian Horse Association (AHA), and they begin competing as three-year-olds. As of 2017, only Texas, Delaware, California, Colorado and Michigan hold Arabian racing events.

Arabians are slower than Thoroughbreds by approximately one second per furlong. 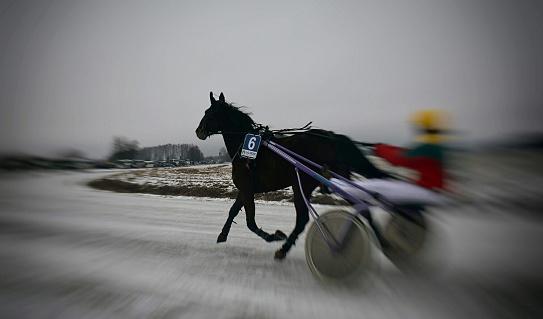 In the United States, Standardbreds compete in harness racing. This breed has a quieter demeanor, shorter legs, and a longer back than Thoroughbreds. Horses reach speeds up to 30 miles per hour while moving at a trot or pace on dirt tracks, and many winners complete the mile-long race in under two minutes. Unlike Thoroughbred horse racing, male and female horses compete against each other in the same races. They begin racing at two years old, and the United States Trotting Association rules dictate that horses must retire from the sport when they reach age 15.

Horse racing is an exciting sport that welcomes everyone from serious gamblers to casual spectators, however, some critics question the racehorses' welfare and whether the competition is ethical. Horse racing has both pros and cons within the industry.

Preparation Is the Foundation

Racehorse trainers and owners spend countless hours preparing their horses for the track, from introducing saddles to yearlings to watching their horses break their maidens. With proper conditioning, some talent, and a little luck, racehorses can have long, successful careers on the track.