Horseback riding is an inclusive sport that has a discipline for every horse breed and for every rider, ranging from quiet Western pleasure rides to thrilling show jumping competitions. The four basic riding styles are English, Western, Endurance and Racing.

English riding disciplines use an English saddle. These saddles allow the horse to move freely while the rider maintains close contact with her seat.

Dressage emphasizes the partnership between horse and rider by showcasing the horse's rhythm, relaxation, connection to the rider, impulsion, straightness, and collection through a series of movements. Competitive dressage has nine levels. Beginners start at Training level, and top competitors show in Grand Prix classes. Any horse breed may compete in this discipline because the competition judges the horse's skills rather than breed-specific qualities.

A dressage saddle has a deep seat and long flaps. This allows the rider to align her ears, shoulders, hips, and heels while seated in the saddle. This is the optimal dressage riding position. Long billets prevent the girth from interfering with the rider's legs.

Show jumping, working hunter and equitation over fences classes feature horse and rider teams jumping over fences. The difference between the events is how classes are judged.

All three events use close contact saddles. These have a forward seat, allowing the rider to move securely with the horse as it jumps. 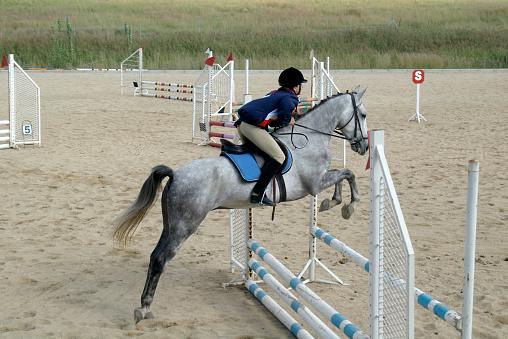 Eventing is a three-day show with horse and rider teams competing in dressage, cross country and show jumping.

Judges score horse and rider teams in each event and then add the final scores and penalties together to determine the winner. The winner has the lowest score. 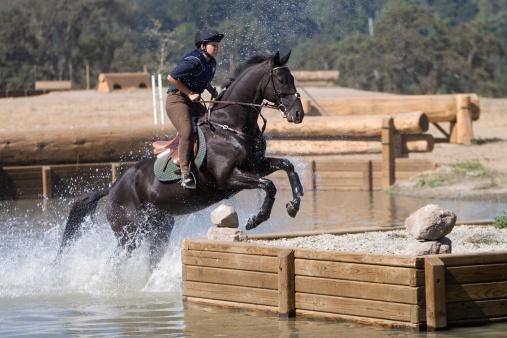 Saddleseat shows off the high-moving action of some horse breeds, including the American Saddlebred, Tennessee Walker, Morgan, Paso Fino and Arabian. These horses naturally carry their heads high and move with animated gaits.

The rider sits back in the saddle with long legs and holds her hands higher than in other English riding disciplines. The horse must appear energetic but remain in the rider's control.

A saddleseat saddle has a long, flat seat and cutback pommel to prevent the saddle from interfering with the horse's withers. This saddle sits further back than other English saddles. 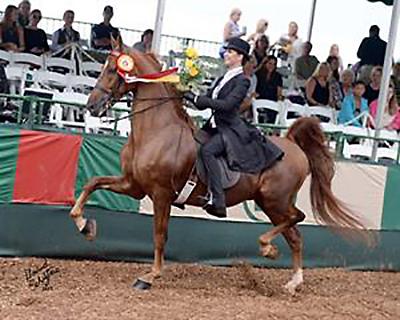 Many Western riding events developed from working ranches. A Western saddle has a horn on the pommel, used for roping cattle or to support the rider through fast movements in some disciplines.

Western pleasure is a class in most open and breed-specific horse shows. Horses move in a slow, relaxed manner through a walk, jog and lope. The judge looks for consistent performance and natural gaits.

A Western pleasure saddle has elaborate floral or basket weave tooling. It also has silver trim for extra sparkle in the show ring. 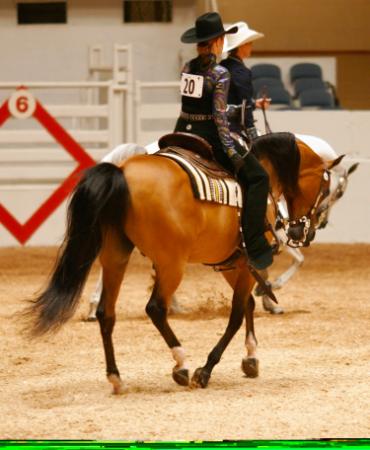 In competition, each horse and rider team starts with a score of zero. The judge then adds or subtracts 1/2, one, or 1 1/2 points for each maneuver. A team loses points for poor execution and gains points for good or excellent execution. The team with the highest score wins.

A reining saddle gives the rider close contact with the horse. It uses only a front cinch and has cutout skirts to keep the rider's leg near the horse for subtle communication cues. 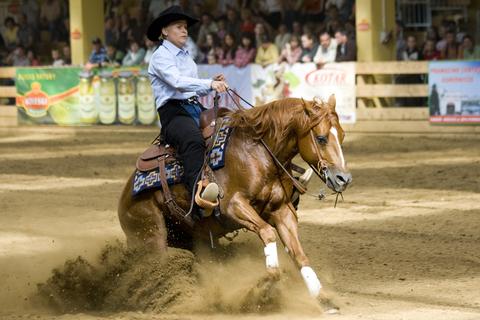 In cutting competitions, each horse and rider team has 2.5 minutes to show the horse's athletic ability in working cattle. The team "cuts" a cow, and the horse moves back and forth to prevent the cow from returning to the herd. Loose reins allow the horse to work with only leg cues. Each run includes cutting two cows. Runs score between 60 and 80 points, with 70 being the average score. The judge adds points for the horse's courage, difficulty, and overall eye appeal. The team loses points if the horse charges a cow, if a cow escapes back to the herd, or if the rider uses the reins to control the horse.

A roping saddle is heavy and durable. Leather or rubber wrapping on the saddle horn protects it from a dallied rope. 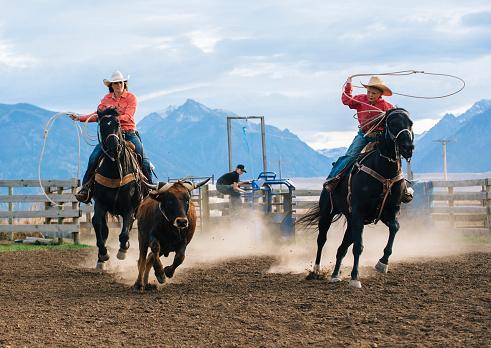 Barrel racing is a speed sport. A horse and rider run a cloverleaf pattern around three 55-gallon plastic barrels set in a triangle shape. The team with the fastest time is the winner.

A barrel racing saddle is the lightest weight Western saddle. It has a high cantle and pommel to keep the rider securely in place through sharp, fast turns. 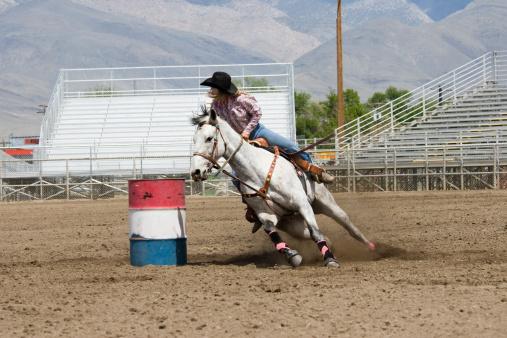 Gymkhana, also called O-Mok-See, is a series of speed games played on horseback. Events may include pole bending, flag and keyhole. In all these events, the team with the fastest time wins.

In endurance riding, horse and rider teams travel across 50 or 100-mile courses. Horses or riders new to the sport compete in Limited Distance rides, which are 25 to 35 miles long. Any breed of horse, pony, or mule may compete, and the rider may use English or Western style tack.

The rider chooses her own pace throughout the course. The winner is the first horse to cross the finish line the veterinarian determines is "fit to continue." One of the top ten finishers wins Best Conditioned, which is determined by the weight carried, time to complete the course, and veterinarian scores. 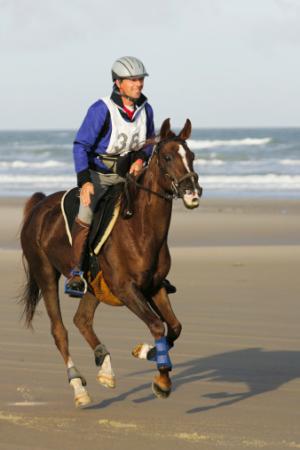 In racing, two or more horses ridden by jockeys run a predetermined distance. The horse who covers the distance the fastest is the winner. Racing may be on the flat or over jumps. Flat racing is the most common type. In jump racing, also called steeplechasing, the horse and jockey must jump several obstacles on the track. 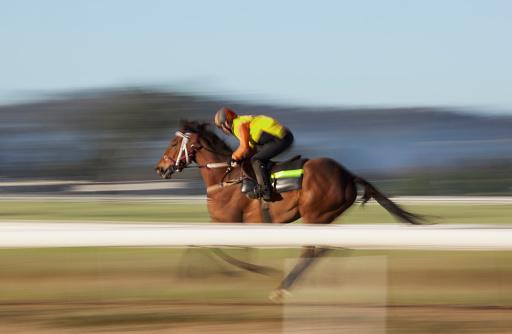 Horseback riding in any discipline requires hard work and dedication. However, the time spent in the saddle strengthens the bond between horse and rider, and this bond is the reason that so many riders continue with the sport throughout their lifetimes.