Horseball is an exciting horseback combination of rugby, basketball, hockey, soccer, and Harry Potter's magical game Quidditch. The sport is quickly gaining global popularity and welcomes riders of all abilities, from novices to professionals.

Each team has six members, including four active players on the field and two substitute players. Teams include both male and female players, except in the Ladies league. Horseball games are 20 minutes long, with two 10-minute periods with a three-minute break in between.

The game begins with the ball placed on the pickup team's 10-meter line. The pickup team moves towards the ball at any gait and one team member picks up the ball without dismounting in a move called ramassage.

Each player may only hold the ball for 10 seconds before passing it to another team member. After at least three passes between three different players, the player with the ball may shoot at the hoop and score a goal. The team with the most goals scored at the end of the 20-minute game wins.

Rules of the Game

Players may grab the ball from the other team's players, but they must remain seated in the saddle and may only use one hand to do so. Standing in the stirrups while grabbing the ball results in a penalty. Players may use their horses to push the other team out of bounds in a move called tackling, and this is legal as long as each player is safely seated in the saddle.

FIHB strictly forbids tackling or otherwise intimidating players attempting to pick up the ball, and this includes forcing that player to change the direction of travel. Any player from either team can pick up the ball if it falls on the ground, however, they can only legally pick it up if they are traveling in the same direction as the ball was before the drop. This prevents dangerous head-on collisions on the pitch.

Anyone with the ability to control their horses with only their legs and seats can play horseball, including novice riders. Players need good hand-eye coordination more than athletic ability. Children as young as six can participate in the Under 16 league in the appropriate age division and may move up to the Pro Elite league at age 16. Below you can watch an amateur team play the game.

Horseball requires only a few pieces of specialized equipment for horse and rider, making this a very affordable game.

The riding arena, called the pitch, has a soft, nonslip, well-drained sand surface and may be indoors or outdoors. Its dimensions are the same as a large dressage arena at 25 meters wide and 65 meters long. Size may vary depending on location, ranging from 20 to 30 meters wide and 60 to 70 meters long. The pitch has three to five-meter wide Security Zone along each side marked by a low barrier. This is where substitute players and coaches wait. The ends of the pitch have a 1.6-meter tall impassable barrier.

A white hoop with a one-meter diameter hangs at each end, placed 4.5 meters above the ground with a white net behind it. The hoops may have a frame or may be suspended above the pitch.

Player attire includes riding breeches, tall boots, helmets, and team jerseys. For additional protection, players may choose to use knee pads, body protectors or gloves, but the official rules do not require the use of these pieces of equipment. FIHB forbids jewelry and watches for safety reasons, but players may wear rings if their gloves cover the rings.

Players use standard English tack on their horses, including English saddles, square saddle pads, and martingales. FIBH forbids the use of Fulmer bits, but otherwise, the players may use any bit, or they may choose to ride in bitless bridles. Each horse in competition wears bandages and overreach boots for leg and hoof protection. The only specialized piece of tack is the pickup strap, which runs under the horse's belly and links the stirrups together. Pickup straps allow the players to lean off their horses to pick up the ball from the ground. All tack must be in good repair, and players must immediately replace any tack that breaks during play. 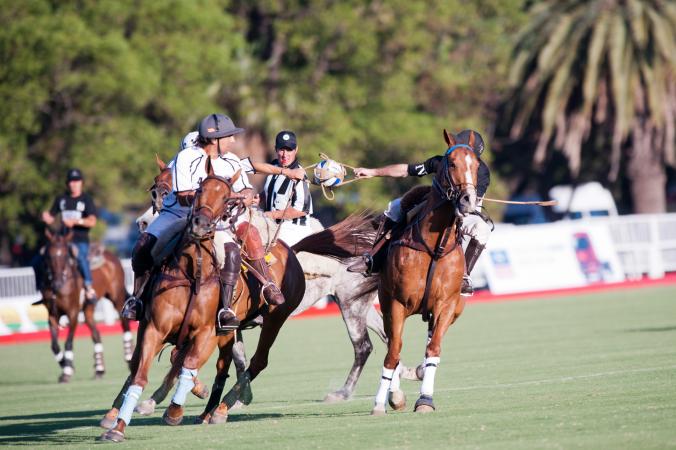 Players may use any horse breed in competition as long as the horse is at least five years of age. Very young children commonly use Shetland ponies and later graduate to larger ponies and full-sized horses as they progress through FIHB's age divisions. Some adult players prefer Thoroughbreds because of the breed's speed and agility, while others prefer shorter stock horse crosses so they are closer to the ground for picking up the ball. Players rarely use horses over 16.3 hands tall due to the difficulty of reaching a ball on the ground from that height.

Horses must be in good health and agile. The sport requires sudden spurts and stops as well as tight turns.

FIHB limits horses to playing on only one team and in only one match per day. However, any player on the team may ride the horse in competition.

The modern version of horseball began in France in the 1970s, and the game remains most popular in that country. However, 18 countries on five continents are members of FIHB, and the organization holds sanctioned competitions around the world each year for its Under 16, Ladies and Pro Elite leagues.

A Great Activity for Anyone

Horseball is an exciting game for equestrians of all disciplines. The game's simple rules and emphasis on safety makes it a suitable activity for small children and novice riders, but the excitement and fast pace provide a fun challenge for even advanced equestrians.